"To organize the development around the world, and promote Việt Võ Đạo, in August 1974 a French delegation leaded by Masters Nguyễn Dân Phú and Phan Hoang goes to Vietnam."
Việt Võ Đạo is not a particular style or school, but a generic term to name all kinds of Martial Arts originating in Vietnam. That is the reason why it is commonly associated with another term to name precisely a given style or school. Examples are Cửu Môn Việt Võ Đạo, Vovinam Việt Võ Đạo, ...
Nowadays, various Việt Võ Đạo schools are established in most countries in the world. 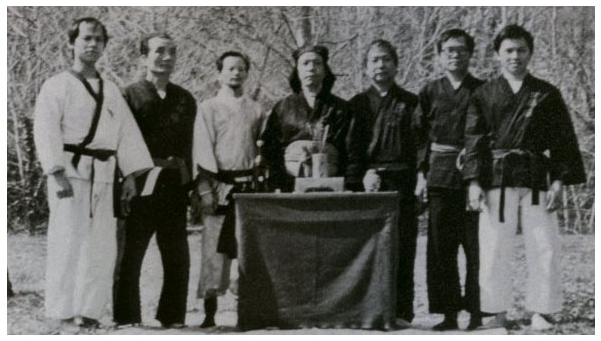 Master Phan Hoang is elected President of the new federation.
To keep the identity and specificity of each of the different schools, they choose for the federation a generic name, honouring their birth country:
.    Việt : Vietnam
.    Võ : Martial Art
.    Ðạo : The way
The "Fédération Française de Việt Võ Đạo" is officialy established in 1972.
Vietnamese Martial Arts will then experience a steady development in France (including overseas), in Europe and soon in the whole world.
To organize the development around the world, and promote Việt Võ Đạo, in August 1974 a French delegation leaded by Masters Nguyễn Dân Phú and Phan Hoang goes to Vietnam, in Saïgon. 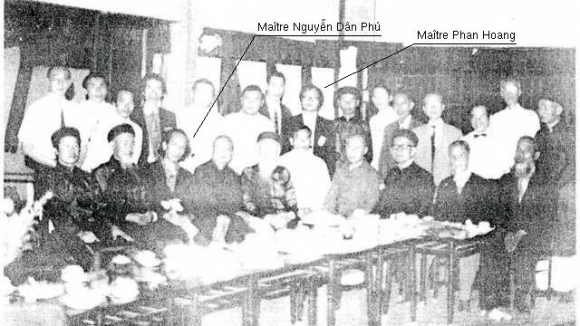 The French delgation, leaded by Masters Nguyễn Dân Phú and Phan Hoang,
hosted by Việt Võ Đạo officials in the International VVD Center
The plan for developing Việt Võ Đạo (technique, supervision, etc.) is decided with all the officials and Vietnamese schools representatives. Master Phan Hoang becomes President of International Việt Võ Đạo, and Master Nguyễn Dân Phú is named Dean of the Masters Council.
On March 31, 1978, a decree signed by the "sports and youth" minister awards official credentials to the FFVVD 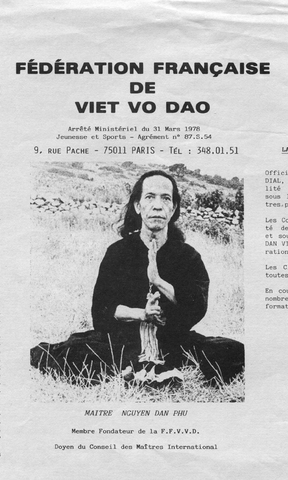 A document from the Fédération Française de Việt Võ Đạo
Unfortunately, whith the decease or leaving of some Masters Founders, and especially the arrival of a new generation of executives, the FFVVD will suffer troubled times, finally leading it to burst and disappear.
Since then, these events ended up in the creation of different federations: the UFVO (to which the Cửu Môn school is affiliated), the FAMTV, the FRAM, and some minor groups. Fortunately, these splits did not slow down the development of Việt Võ Đạo, in France as well as around the world.
The traditional vietnamese structure: school - master - disciple certainly explains the resistance and development of Việt Võ Đạo despite the difficulties it experienced.
Việt Võ Đạo in Vietnam
This term is actually more used outside of Vietnam. Inside the country, older or more traditional terms are generally used: Võ cổ truyền (traditional martial art), Võ thuật (martial technique) or more often Võ (martial art).
For Vietnamese people, practicing Võ is not only training on fighting techniques, but moreover develop one's culture and improve one's personality through the five traditional confucianist virtues:

This virtues are studied in all serious Võ schools.
The word Võ Sư (expert in martial art) is very close to what the other martial arts mean by "Master".
The Vietnamese martial art is totally bound to the culture and history of the country. The development of the main schools and groups started in the end of the 19th century. The most famous Masters of that time, considered as founders of the modern Vietnamese martial art, as we know it now, were Masters Ba Cát, Hàn Bái, Cự Tốn (1st Master of Nguyễn Dân Phú), Sáu Tộ, etc. Later, in the 40s and 50s, came Masters Quack Van Ke (Lam Son school), Nguyễn Lộc (Vovinam), and so on. At the same time appeared the first schools in France (Nguyễn Dân Phú : Thanh Long school, Hoang Nam : Wu Tao school).
Many schools develop in the whole country (North, Center and South of Vietnam), each with its specificity (Thiếu Lâm, Binh Đinh, Vinh Xuân, etc.). The authorities ease and foster this development, and official federations exist. In Hà Nội, Hội Võ Thuật Hà Nội federation counts more than 50 different schools, the Masters of which come directly from the great Founders like Cự Tốn, Sáu Tộ, etc.
International exchanges have been increasing for around 15 years.
Vovinam history is somewhat special, because one can not really consider it a school, as it was designed from the beginning as a sports movement.
It mainly developed outside of Vietnam, due to many Việt Kiêu (expatriates) settling down in all parts of the world.
Very well known because of its choice for acrobatic and spectacular techniques, Vovinam actually represents only a small percentage of people practising Vietnamese martial art (Việt Võ Đạo).
In Vietnam, Vovinam is only established in Saïgon and around, and in France it accounts for a mere 10% of people practicing Vietnamese martial arts.
From the books : "Nguyễn Dân Phú, sa vie, son œuvre" and "Cửu Môn Việt Võ Đạo" published by André Gazur.